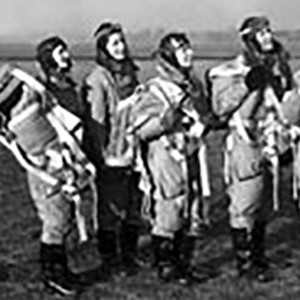 The Women's Section of the Air Transport Auxiliary

The Women's Section of the Air Transport Auxiliary (ATA) was established on January 1, 1940, to help ferry aircraft throughout Britain during World War II. Despite the initial negative reaction, and the fact that they were restricted to flying only single-engine, open-cockpit training aircraft such as the Tiger Moth, the first eight women were so successful that more women joined the section. As more male pilots were needed for combat, the women began to ferry twin-engine aircraft, then fighter aircraft such as Spitfires and Hurricanes, twin-engine bombers and finally four-engine bombers such as the Halifax and Stirling. Twenty six American women signed up for the ATA, and other women pilots came from Australia, New Zealand, Canada, Poland, Holland, Chile, and South Africa. Of 14 women who lost their lives flying for the ATA, 12 were British (Amy Johnson being the most famous). By the end of the war, 166 women had flown for the ATA and 11 had received awards for their bravery.