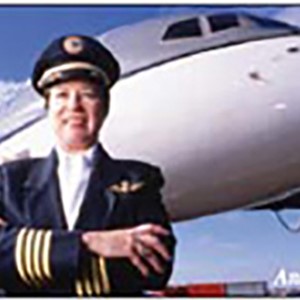 Sandra L. Anderson is the second woman pilot hired by Northwest Airlines and one of the first female pilots to check out in the left seat of the Boeing 727. Flying wasn't Sandy's first vocation. She has a BS degree in art with minors in music/physical education from Texas Woman's University and is a Hall of Fame graduate of nearby Lewisville High School. In 1970, she taught school for two years in the La Marque, Texas school district where she later met and married Dick Anderson, a NASA engineer and skydiver. A tragic accident took Dick's life in 1975. By then, Sandy was working on her commercial pilot's license and was determined to use her painful loss to move her life in a new direction. On the advice of her flight instructor that she had the right stuff to become an airline pilot, she quit her graphic illustrator's job with Exxon and concentrated all her efforts on logging flight experience, giving flight and ground instruction and achieving pilot certificates and ratings. In 1978, Sandy began applying to airlines without success. So, she enrolled in the B-727 flight engineer's school and kept knocking on doors for. interviews. In 1979, she was the second female pilot hired by Northwest Orient Airlines. At Northwest she's served as the first NWA Boeing 727 female instructor/checkpilot, the first female Fleet Check Captain among the major US airlines and was a Chief Pilot at the Minneapolis/ St. Paul crew base. She was a Captain on the Boeing 747-400, flying international routes. Sandy was presented the prestigious Northwest Airlines Humanitarian Award, and the Texas Woman's University Distinguished Alumna Award for outstanding achievements and contributions. Anderson holds a MS degree in Human Resources/Organization Development from the American University in D.C. and certification in fundraising management at the University of Indianapolis-Center of Philanthropy. Sandy is a founding board member of WAI International, and helped establish its Endowment Fund.