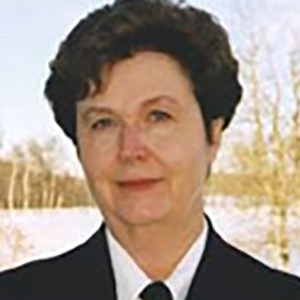 In April 1973, Rosella Bjornson was the first woman in North America to be hired as a first officer for a scheduled airline. (Emily Howell Warner was hired as a second officer in January 1973.) Born in Alberta, Canada, Rosella enjoyed flying with her dad in his Aeronca Champ. She took her first flying lesson on her 17th birthday. In 1969, she earned her instructor rating and taught at a flying club in Winnipeg. She was the first woman awarded the 89th Gold Seal of Proficiency from the Royal Canadian Flying Clubs Association. By early 1973, she had 3,500 flying hours, an air transport rating and a class I multiengine instrument rating, so she applied to fly with the airlines. In April 1973, Transair, Canada's fourth largest airline, hired her as the first female first officer on a Fokker F28 jet. She was the first woman to be hired by a commercial airline in Canada, and the first woman member of the Canadian Air Line Pilots Association. Married in 1977, she had to take an unpaid leave of absence for her first pregnancy in 1979 since there were no government regulations to address the subject. By her second pregnancy in 1984, she had been instrumental in changing those regulations to allow a pregnant pilot to fly. In 1990, Rosella was the first woman promoted to captain with a major Canadian air carrier. Rosella was inducted into the International Forest of Friendship in 1988, and into Canada's Aviation Hall of Fame in 1997. She is a motivational speaker and has been an active supporter of women in aviation careers.