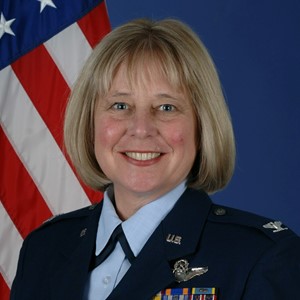 Col. Peggy A. Phillips, U.S. Air Force (ret .) was the first woman selected by the 702 nd Military Airlift Squadron to attend undergraduate pilot training. After graduating in April 1981, UPT Class 81-05, Peggy returned to McGuire Air Force Base, New Jersey, to fly the C-141 Starlifter. She upgraded to Aircraft Commander in minimum time, and then became an instructor pilot, flying global missions. She then rose to be the first female C-17 squadron commander and served over two years during Operation Iraqi Freedom. After logging over 5,200 hours, including 240 combat hours, she was promoted to the rank of Colonel and transferred to the Tactical Airlift Command Center, where she fulfilled the role of senior director of operations for five years. During that tenure, Peggy became the first female reserve pilot to serve as director of mobility forces supporting the Katrina Operation. Serving for 30 years as an Air Force Reserve officer, Peggy retired from military service in 2010. A recipient of numerous service medals, Peggy is also a charter member of Women Military Aviators and a WAI Lifetime member.