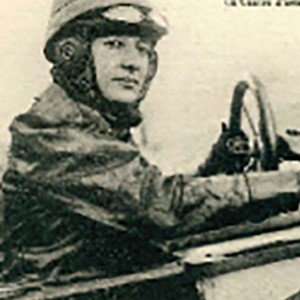 A world class athlete, Marie Marvingt won gold medals in skiing, bobsledding, skating, rifle shooting and numerous other events. She was the only person in history to earn the gold medal of the French National Sports Federation "For All Sports awarded in 1910." She was so successful in sports that she was named in a 1914 anti-feminist book as setting a poor example for young women, because she did not participate in sports for entertainment or health, but displayed unladylike characteristics in that "she competes fervently and "really tries to win." Marie learned to pilot free balloons in 1901, later becoming the first French woman to obtain a balloon pilot's license. She won numerous competitions and set records for French balloon pilots (male and female), and was the first woman to pilot a balloon from the Continent to England over the English Channel on October 26, 1909. On June 10, 1910, Marie became the third woman in the world to earn a fixed wing pilot's license, following Baroness Raymonde de LaRoche and Marthe Niel. She became the holder of the first formally recognized woman's flying record, with a flight of 53 minutes during which she flew 42 km on November 27, 1910. She continued flying and competing until World War I. There is evidence in official French records (Marie's Legion of Honor Citation) that she piloted a bomber on at least two occasions during attacks on German-occupied Frescaty (near Metz) in 1915. She may have been the first woman to pilot an aircraft in combat. Marie's greatest achievement was her life-long effort to make the airplane an integral part of medical support for both civilian and military casualties. As early as 1910, she recommended the creation of airplane ambulances, and by 1912 she had designed a practical one and collected public donations to order it from the Deperdussin Factory. World War I interfered, but after the war she eventually gave about 6000 public conferences on five continents.