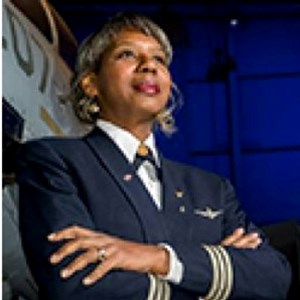 Brenda E. Robinson was born in 1956, growing up in North Wales, PA, as the only daughter of Susan and Edward Robinson. In 1961, her kindergarten teacher sent a note home, concerned about Brenda's desire to become a secretary on the moon. This was only the beginning. Brenda entered a career study program at Wings Field in Blue Bell, PA, as a high school student, broadening her view of aviation careers. Interest grew into a passion as she studied aeronautics at Dowling College in Oakdale, NY. Brenda earned her private pilot certificate at MacArthur Airport in Islip, New York. While a senior at Dowling, a military services meeting paved Brenda's path to a military flight deck. Her 1977 selection as one of 10 women nationwide to attend the Navy's Aviation Officer Candidate School in Pensacola, FL, launched her on a path to become a naval aviator. Brenda became the first African American female graduate from Aviation Officer Candidate School. She earned her wings of gold on June 6, 1980, at Naval Air Station Corpus Christi. As call sign "Raven, Brenda became the first African American female certified for C-1A carrier onboard delivery carrier landings on USS America in January 1981. She amassed 115 carrier landings while transporting mail, cargo, and passengers to aircraft carriers. Her entire career is peppered with firsts for African American women in the U.S. Navy: flight instructor, evaluator, and VIP transport pilot to name a few. In 1992, Brenda transitioned to the Naval Reserves and was hired by American Airlines. She was among the first African American female pilots at American and flew with them for 17 years aboard Boeing 727, 757, and 767 aircraft. Today, Brenda shares her success stories in a number of ways. She published Success is an Attitude: Goal Achievement for a Lifetime in 1995. She is a sought-after speaker at schools, and launched the Aviation Camps of the Carolinas in late 2014. She is currently working on her next book, The Very First Raven.