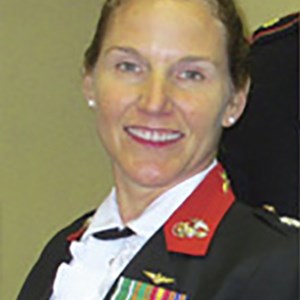 Lt. Col. Karen Fuller Brannen made history on October 17, 1997, when she became the U.S. Marine Corps first female strike fighter pilot to earn "wings of gold." She says that if you'd asked her what she wanted to be when she grew up she would have replied "fighter pilot." The disbelief of others spurred her on. In the spring of her final year of college, Congress passed laws that resulted in women being eligible to fly in the Marine Corps. She applied for the Corps, passed the flight physical and went to training camp. She attended Officer Candidate School in the summer of 1994, completing her studies as an honor graduate and receiving a physical training award. She was commissioned as a second lieutenant that year. In May 1996, after primary flight training, she was the first female Marine to receive a jet training slot. She completed intermediate jet training at Naval Air Station Meridian, in Meridian, MS, flying the T-2C, and then went on to fly the TA-4J with Training Squadron 7. She was the top graduate in her class, and was then selected to fly the F/A-18 Hornet with a West Coast squadron. From there, with the call sign Stump, she was assigned to Fleet Replacement Squadron UMFAT-101 at El Toro, California, then subsequently Miramar, CA. In 2001 Karen deployed with RMFA- 242 to Iwakuni, Japan. She earned her Air Combat Tactics Instructor certification at the end of that year. After a stint in Quantico, VA, in 2002 attending Expeditionary Warfare School she was assigned as an active duty officer to Marine Fighter Attack Squadron 321 at Andrews Air Force Base. From there Karen was assigned to VR-1, where she flew C-37Bs, transporting the Secretary of the Navy, the Commandant of the Marine Corps and various Congressmen. Karen left active duty for a job as a large cabin demonstration pilot for Gulfstream Aerospace in 2007. She remained a Marine Corps Reserve Lieutenant Colonel serving as the Officer in Charge of the Peacetime Wartime Support Team in Savannah, GA.