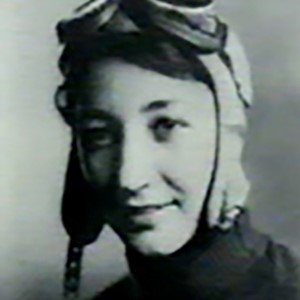 Jessie Woods eloped in 1928 with her husband to be, Jimmie, and shortly after he formed the Flying Aces Air Circus. They did not realize they were making aviation history as they created the longest running of America's flamboyant air circuses. For 10 years, the show continued week after week, with Jessie as the leading lady. She did it all. She stunted airplanes as a pilot, scampered about on wings, parachuted and dangled by her knees on rope ladders that swung beneath the biplanes. She was also a mechanic and later taught military pilots to fly. Jessie flew with the Civil Air Patrol during WW II. She later became a commercial flight and ground instructor. In 1941, she and Jimmie leased Roddey Field, in Rock Hill, South Carolina, and received governmental contracts for military flight training. Jessie retired from flying in 1994, and died on March 17, 2001, at Great Bend, Kansas, at the age of 92.