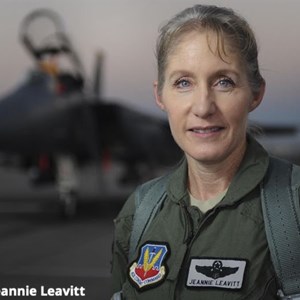 Maj. Gen. Jeannie Leavitt is the commander, Air Force Recruiting Service, Joint Base San Antonio-Randolph, Texas, and made history as the service's first female fighter pilot. In 2016, she became the first woman to head the 57 th Wing at Nellis Air Force Base in Nevada, and in June 2018 she took over Air Force recruiting. Her Air Force career has spanned more than 25 years, and Gen. Leavitt has flown more than 3,00 hours to include 300 hours of combat flight with operational experiences in Afghanistan and Iraq, including in Operation Southern Watch, Northern Watch, Iraqi Freedom, and Enduring Freedom. She is also dedicated to lifetime learning, having obtained four Master's degrees in addition to her undergraduate degree in aerospace engineering. For the 2019 film "Captain Marvel," Gen. Leavitt worked with the production team to coordinate Air Force assistance in accurately portraying female military pilots. Maj. Gen. Jeannie Leavitt induction video .