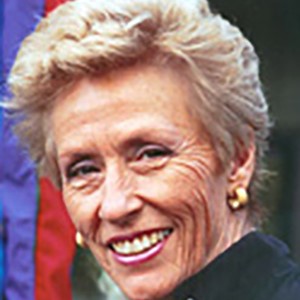 In 1942, Jeanne Holm was among the first women to enlist in the U.S. Army during World War II. She originally served as a truck driver in the Women's Army Auxiliary Corps (WAAC), and was promoted to the rank of captain in 1944. She left active duty after the war, but was recalled in 1948 during the Berlin Airlift and commissioned in the newly created U.S. Air Force. In her 33-year military career, she excelled in many assignments, including director, Women in the Air Force. She was the first woman to attend the Air Command and Staff College. She was the first female Air Force Brigadier General in 1971, and then the first woman in any branch of the military to wear two stars (major general) in 1973. On active duty and after, Maj. Gen. Holm has been an ardent advocate for opening doors to military women. She was appointed a Special Assistant for Women to the President during the Ford administration, and she used her influence to ensure that Air Force women were admitted to flight training in 1976. Following that, she served on DACOWITS, the Defense Advisory Committee on Women in the Services, and was an expert witness in front of Congress numerous times speaking out on issues affecting women in the armed forces. Her books on women in the military are considered classics. Women military aviators owe Maj. Gen. Holm a debt of gratitude for opening doors and for being their advocate. She says, "I have always felt the military's goals were best met by finding the best person-male or female-with the right talents and aptitudes." She died in 2010.