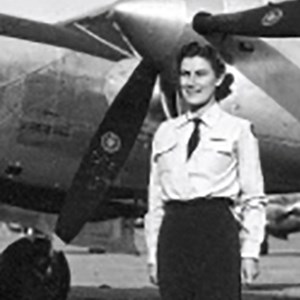 An athlete in her youth, Iris Cummings Critchell was a member of the U.S. Olympic Swimming Team in Berlin in 1936, and reigned as U.S. women's 200-meter breaststroke champion from 1936 to 1939. Iris was a member of the first Civilian Pilot Training Program (CPTP) at the University of Southern California (USC), graduating from the Advanced Acrobatics course in 1940. She was member of the second class of women recruited by Jacqueline Cochran for Army flight training in Houston, earning her wings in May 1943 as a member of WASP Class 43-2. She was assigned to the 6th Ferrying Group at Long Beach, California, serving as a civilian ferry pilot with the Air Transport Command Ferrying Division until the WASP were deactivated on December 20, 1944. She flew 18 types of military aircraft as pilot in command, including the A-24, P-39, P-40, P-47, P-51, C-47, A-20, B-25, P-38, and P-61. Iris developed the first aviation curriculum for the USC College of Aeronautics beginning in 1946. She taught Primary, Instrument, Commercial and Instructor courses and gave all the instrument flight instruction in war-surplus Vultee BT-13 trainers. In the late 1950s, Iris's instruction of, and subsequent friendship with, Isabel Bates spawned a unique curriculum that used the airplane as an educational tool to broaden and enhance the education of young people beginning with junior high and high school. Iris and her husband Howard established the Bates Foundation college-age program at Harvey Mudd College of Science and Engineering at the Claremont Colleges in 1962. Iris served as Director of the Bates Aeronautics Program, and for 28 years, as Lecturer in Aeronautics on the college faculty. After retirement to Emeritus status, she continued some teaching and counseling until 1996. Iris has been active in the Ninety-Nines since 1952. She competed in the All Woman Transcontinental Air Race (AWTAR) 15 times, placing in the top 10 five times.