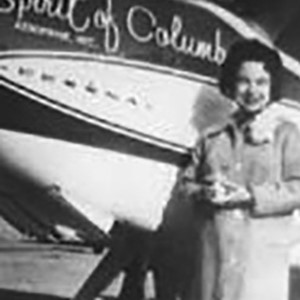 Inspired in 1962 to "add a bit of fun" to her then 38-year life, Jerrie Mock took her husband's jocular remark, "Why don't you fly around the world?" and ran with it. A quarter century had elapsed since Amelia Earhart's fatal attempt, but a woman had not yet soloed around the world. Jerrie modified her 1953 Cessna 180, The Spirit of Columbus , with a new engine and avionics. She took off on March 19, 1964, and landed safely in Columbus on April 17, 1964 (29 days, 11 hours, and 59 minutes later). She was the first woman to fly from the United States to Africa via the North Atlantic, the first to fly the Pacific in a single-engine aircraft, and the first to fly both major oceans solo. Jerrie continued to compete, achieving 21 records for speed and distance. She received the FAA's Gold Medal for Exceptional Service from President Lyndon Johnson in 1964, and was the first woman and first American to be awarded the Louis BlÈriot medal in 1965. She died in 2014.