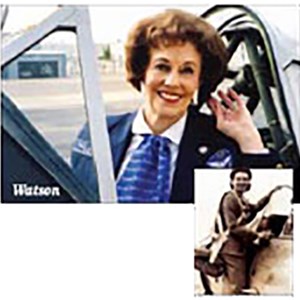 Florene Miller Watson joined the WAFS in 1942, and by the following year, was named Commanding Officer of the WAFS station at Love Field. During World War II, she served as an experimental military airline pilot and also tested radar equipment. By the time the WASP were disbanded, she had flown every type of training, cargo, fighter and twin and four-engine bomber that the Army Air Corps flew and delivered them to US locations. Post-war, Florene taught college for 30 years before retiring. Watson was a member of Women in Aviation International and was active member of the Houston chapter. Florene maintained close ties to many other aviation organizations, including the Texas Aviation Historical Association, the Ninety-Nines, the Air Force Association, the Commemorative Air Force, Women Military Aviators, and WASP of World War II. She was well known as National Chaplain of the WASP, for which she has delivered many inspirational prayers. She died in 2014.