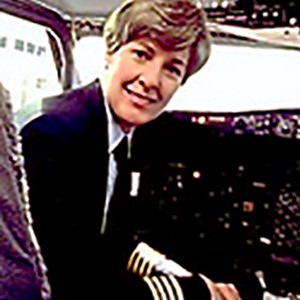 Emily Howell Warner was the first permanent female pilot for a scheduled U.S. passenger airline. She took her first airplane ride when she was 17, and immediately decided on aviation as a career. She first sought a job at Frontier Airlines in 1968, and renewed her application frequently. After she turned 30, she lost all hope of being hired, especially after watching her own former students, who happened to be male, being hired. Finally, in January 1973, Frontier agreed to take the bold step of hiring a woman. She initially flew as a first officer on Convair 580s and de Havilland Twin Otters. In 1976, she became the first female U.S. airline captain, flying a Twin Otter. Emily then became captain of a Boeing 727 for United Parcel Service. In 1974, she became the first woman member of the Air Line Pilots Association (ALPA). In 1990, she retired from UPS to become a Federal Aviation Administration examiner. She died on July 3, 2020, at the age of 80.