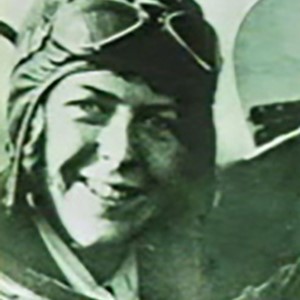 Elinor Smith was a record-breaking pilot who did everything with a flourish. She soloed at the age of 15 and three months later set an altitude record of 11,889 feet in a Waco 9. In 1927, she became the youngest licensed pilot at the age of 16. In 1930, at the age of 18, she became the youngest pilot, male or female, granted a transport license by the U.S. department of Commerce. Other records Elinor set include: an endurance record of 13.5 hours in a Burner-Winke biplane in 1929, only to break that record later that year with 26.5 hours in a Bellanca CH monoplane and the women's world speed record of 190.8 in Curtiss military airplane. Also in 1929, Elinor and Bobbi Trout set a new women's refueling record of 42.5 hours. In 1930, Elinor was selected by licensed American pilots as the "Best Woman Pilot In America," During the Depression, Elinor was a stunt pilot for movies, air shows and fundraisers for the homeless and needy. Elinor lived in Santa Cruz, California, and died in 2010.