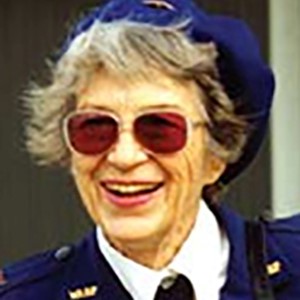 Dot Swain Lewis was one of ten women pilots taught to be instructor pilots at Phoebe Omlie's Women's Research Flight Instructor School, from late 1942 to early 1943. The school was a one-time experiment, set up by the Tennessee Bureau of Aeronautics, to prove that women were capable of being instructor pilots. Phoebe Omlie believed that, "Women taught men to walk, they can teach them to fly!" Her women instructor pilots went on to train Navy men to fly in combat situations. While Dot was still an instructor under training at Omlie's school, Jackie Cochran approached her about joining the Women Airforce Service Pilots (WASP). Lewis declined Jackie's invitation at the time because she wanted to honor her obligation to complete instructor training. After a few months teaching Navy men to fly, she accepted a position teaching the WASP to fly. Eventually she resigned from teaching the WASP in order to become a WASP. Lewis did double duty serving our nation in World War II. She taught future Naval aviators to fly. No doubt some of those Navy men flew in combat and helped win World War II. As a WASP, she flew military aircraft on missions, which relieved male pilots for combat. One of these aircraft was the Martin B-26 Marauder, which towed targets for B-24 gunners in training. While serving as a WASP, she also helped document their experience and maintain morale with her humorous cartoons and musical talents. Since World War II, Lewis has married, had a family, and lived a lifetime of extraordinary accomplishment. She has taught biology, physics, art, horseback riding, and flying. She was an accomplished artist and sculptor who died in 2013.