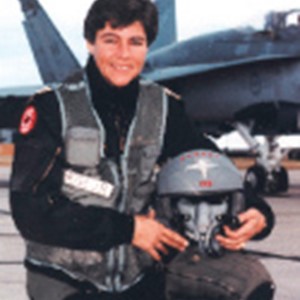 Dee Brasseur enrolled in the Canadian Forces in 1972 as an Administrative Clerk with the rank of Private. Soon after, she was commissioned under the Officer Candidate Training Program. When the Canadian Forces announced a trial program in 1979 to employ women in the pilot career field, Dee volunteered and successfully graduated as one of the first three women to earn their wings in 1981. She was the first woman jet pilot instructor assigned to 2 Canadian Forces Flying Training School (2CFFTS), Moose Jaw, Saskatchewan (1981-85) and the first woman pilot to be awarded a Flight Commander position as the T-33 Flight Commander with Base Flight Cold Lake, Alberta (1986-88). In 1988, Dee was one of the first two women pilots selected to train on a jet fighter plane. She progressed through 419 Squadron Basic Fighter Training on the CF-5 Freedom Fighter, and 410 Squadron Operational Training Unit to fly the CF-18 Hornet. She served as a line pilot and Squadron Plans Officer with 416 Tactical Fighter Squadron, Cold Lake, Alberta (1989-90). Major Brasseur was then assigned as the first woman Military Aircraft Accident Investigator, and became the Senior Staff Officer at the Department of National Defence Headquarters responsible for supervising all Canadian Forces Jet Trainers and Fighter Aircraft. In 1994, she took an early retirement to establish her own business. She wrote Achieve It: A Personal Success Journal and established Unlimited Horizons, a professional speaking, performance coaching and training business committed to "unlocking the magnificence within each and everyone” through teaching the physiology and psychology of excellence. In 1995, Dee formed, trained and led the Canadian Precision Flying team (all female) to compete in the 1996 FAI World Precision Flying Championships held in Fort Worth, Texas. Officially recognized by the government for her contributions in Canadian aviation, Dee was inducted as a Member of the Order of Canada in February 1999.