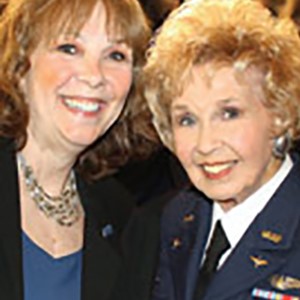 From the day Nancy Parrish invited her mom Deanie Parrish, a member of the Women Airforce Service Pilots (WASP) who flew the B-26, to join her, this mother-daughter team has voluntarily worked for the past 17 years to share the untold history of the WASP "in as many ways and as many different formats as possible." Beginning with a few pages of Deanie's WASP scrapbook in 1996, Nancy created www.WingsAcrossAmerica.us/wasp, the WASP on the Web, and has grown the website to more than 2,000 pages of valuable WASP resources, photos, songs, videos, and games for kids including WASP paper dolls. In 1998, they began Wings Across America. Their mission was to interview WASP and share their overlooked history. The pair traveled to 19 states, interviewing on digital video more than 100 WASP in their own homes. They founded the National WASP WWII Museum at Avenger Field, where the WASP trained, in 2003. The team then designed and created the exhibits. Nancy served as the volunteer executive director for three years with Deanie serving as board member and facilities chairman. In 2005, the two led a successful campaign for the Texas WASP to be inducted into the Texas Aviation Hall of Fame. And in 2007, they created an extensive Fly Girls of WWII WASP exhibit, which was on display at the Women's Memorial in Washington, D.C., for almost two years and is now a permanent exhibit in the Kalamazoo Air Zoo in Michigan. Other team projects include an original WASP rap, "We Got the Stuff, the Right Stuff," which tells the entire history of the WASP, marching songs, history cards, and a mosaic featuring the faces of every WASP. In 2008, Deanie initiated and pursued the goal to honor the WASP with the Congressional Gold Medal. Nancy began growing the electronic presence of the WASP online, spearheading the successful grassroots campaign. In 2010, Nancy completed an illustrated book WASP in Their Own Words , featuring quotes from 130 WASP and faces of every WASP. She gave copies to each WASP