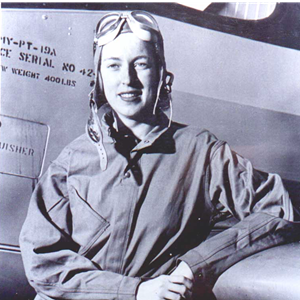 Cornelia Clark Fort earned an instructor's rating in March 1941, and became Nashville's first female flight instructor and the only one in Tennessee at that time. She became famous for being part of two aviation-related events. The first occurred while conducting a civilian training flight at Pearl Harbor on December 7, 1941, when Cornelia was the first U.S. pilot to encounter the Japanese air fleet during the attack on Pearl Harbor. She and her student narrowly escaped a mid-air collision with the Japanese aircraft. The following year, Cornelia became the second member of what was to become the Women Airforce Service Pilots (WASP). She was stationed at the 6 th Ferrying Group base at Long Beach, California and on March 21, 1943, became the first female pilot in American history to die on active duty. While flying in formation enroute to Love Field in Dallas, Cornelia's left wing of her BT-13 was struck by the landing gear of flight officer Frank Stamme Jr's airplane. She went into an irreversible dive and crashed ten miles south of Merkel, Texas. Cornelia was portrayed in the film Tora! Tora! Tora! and the Cornelia Fort Airpark in East Nashville is named after her.