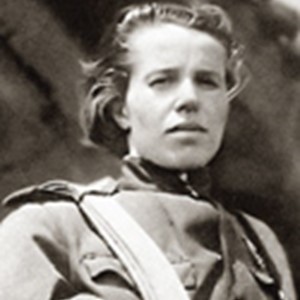 Anna Timofeyeva-Yegorova is one of the most famous Soviet women to fly in a male combat regiment during World War II. She began the war as a pilot in the unarmed Polikarpov-2 (Po-2). She later flew the Ilyushin-2 (Il-2) "Shturmovik" in more than 270 combat missions and was shot down in August 1944, badly injured and imprisoned in a Nazi concentration camp. Liberated by Soviet tank troops in January 1945, she was detained and interrogated by the Soviet secret police which treated former prisoners of war as traitors. The stigma of having been a POW haunted Anna for 20 more years, until she was considered "rehabilitated" in 1965 and was awarded the Hero of the Soviet Union, the highest honor a Soviet citizen could win. She died in 2009.