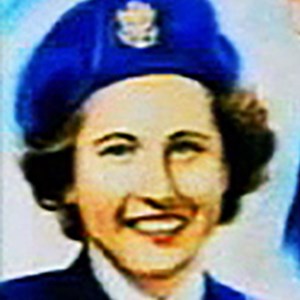 Ann Baumgartner Carl learned to fly in 1940 and entered Women Air Force Service Pilots (WASP) training during World War II. She was assigned to tow a target squadron at Camp Davis, North Carolina, flying Curtiss A-25s. She was transferred to Wright Field in Dayton, Ohio, where she became the first and only female test pilot. It was there she became acquainted with Orville Wright, a frequent visitor at the field. On October 14, 1944, Ann became the first woman to fly a jet aircraft, the Bell YP-59A. A partial list that she flew during her WASP service include: AT-7, AT-17, AT-10, C-45, C-47, A-24, A-25, B-25, B-26, B-17, B-29, P-38, P-40, P-47, P-51, YP-59A as well as foreign-made Avro Lancaster, deHavilland Mosquito, Spitfire, Junkers Ju-88 and the Canadian C-64. After the WASP disbanded in December 1944, Ann returned to flight instruction and writing for The New York Times and other publications. She is the author of more than 2,000 newspaper columns and magazine articles on science and the environment. Ann is a graduate of Smith College in Northampton, Massachusetts. She died in March 2008.