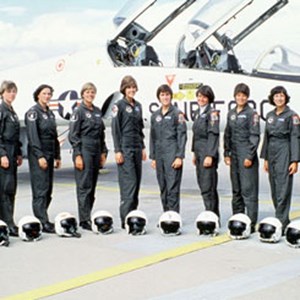 In 1975, the chief of staff of the Air Force announced the establishment of a test program for female pilots and navigators. Although women had already proven their ability to fly military aircraft, such as the WASP had in World War II, this test program would establish a precedent for the future of Air Force female pilots. The candidates were all Air Force officers from various career fields, including a nurse, engineer, and maintenance officer. On August 26, 1976, Capt. Connie Engel, Capt. Kathy LaSauce, Capt. Mary Donahue, Capt. Susan Rogers, Capt. Christine Schott, 1st Lt. Sandra Scott, 1st Lt. Victoria Crawford, 2nd Lt. Mary Livingston, 2nd Lt. Carol Scherer, and 2nd Lt. Kathleen Rambo began the T-41 flight screening program at Hondo Municipal Airport in San Antonio, Texas. On September 26, 1976, they proceeded to Williams Air Force Base and together with their 35 male classmates began a 48-week pilot training course. Each candidate accumulated 210 hours in the Cessna T-37 and the Northrop T-38, and 790 hours in academic, flying, and officer training. Connie Engel was the first woman to solo in the T-41 and T-37, and she was the first woman to lead a two-ship formation. Christine Schott was the first woman to solo in the T-38. These women not only passed the course, but also excelled. On September 2, 1977, all 10 women earned their silver wings. Connie, who was the class leader, received the Air Training Command Commander's Cup for overall leadership and flying ability. Additionally she was awarded the Officer Training Award. Mary Donahue received the Academic Award, missing only one question out of 395 asked during formal examinations. These women went on to fly in support of many combat missions including Grenada, Panama, Desert Storm, Desert Shield, and African conflicts. They also accumulated a few more "firsts.” Connie Engel became the first female T-38 instructor and flew T-38 chase for the space shuttle program.