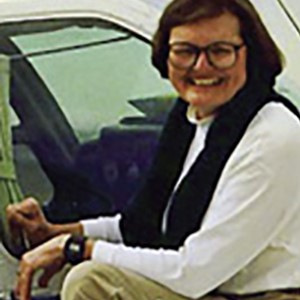 "Flying was just a wonderful thing to do. It was a liberating thing," Mary says, smiling, when asked. Her first taste was in a crop duster in 1939 when she was four years old, but it wasn't until she had graduated from Rhodes College in Tennessee and headed to New York that she finally began piloting her career. Mary began her publishing career at Mademoiselle magazine as an assistant fiction editor. In 1963 she became a copy editor at McGraw-Hill Book Company. She thought she might take a flying lesson at the nearby Teterboro Airport in New Jersey. It was expensive, but she took a few lessons and re-discovered that she loved it. When a colleague from McGraw-Hill told Mary that he was going to learn how to fly as part of his new job at Flying magazine, she was intrigued. She wrote to the editor and said, 'I think you need (to hire) me, too' and they did. Mary spent a year earning her pilot's certificate, training at Republic Airport on Long Island. Her career in aviation and journalism began to climb. But some thought there were limits. The publisher of Flying actually came to her apartment and told her she couldn't have the job of managing editor because she was female. She left to become managing editor of Air Progress . At Air Progress she was promoted to executive editor. Having her seaplane rating helped her move into her next position as editor at Water Flying , where she was responsible for magazine content and advertising sales, as well as speaking at fly-ins. In 1987, Mary had ascended to the highest point of her career: the first female editor-in-chief of Private Pilot , followed up by a stint at Professional Pilot , which dealt with private business aircraft. By the end of her flying days, Mary had flown 250 different types of aircraft to such cities as Dubai, Paris, London and Singapore and logged 5,000 flight hours. She was inducted in October 2010 into the Arkansas Aviation Historical Society's Hall of Fame.