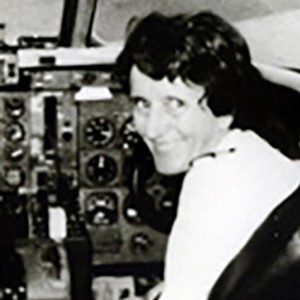 Fiorenza de Bernardi has five decades of accomplishments in aviation. A record setter, pioneer and tireless advocate for women's opportunities in aviation, she has made an indelible mark on aviation. Born May 22, 1928, in Florence, Italy, she learned to fly in 1951. Being the daughter of Col. Mario de Bernardi, a world champion seaplane racer and aerobatics champion helped. She entered air races in Italy and other European countries in 1953. Fiorenza has flown the Twin Otter, Queen Air, Yak-40, and DC-8 aircraft all over the world. She received her glider pilot certificate in the 1960s and was the first women in Italy to earn a glacier pilot certificate. She joined the 99s in 1956. She became the first woman airline pilot in Italy and one of the first woman airline pilots in Europe when Aeralpi hired her in 1967 to fly the Twin Otter. She then became the first woman airline captain in Italy in 1969. She trained in Russia on the Yak-40 for Air Terrenia and flew this aircraft as a charter demonstration pilot. She worked as a professional pilot for 18 years until retiring after suffering severe injuries in an automobile accident in 1985. She continued her staunch advocacy for women's advancement in aviation after retirement. She founded and is current vice president of API- Associazione Italiana Donne Pilota, the Italian Woman Pilots Association. This organization is now called ADA- Associazione Donne Aria since its members now include Italian women skydivers. She is president of FPE- European Women Pilots Federation. She is the editor of Pink Line, a Gallery of European Women Pilots, a compilation of all pioneering women pilots in Europe. Fiorenza joined the International Society of Women Airlines Pilots in 1985 and continued her efforts. The ISA+21 Merit Scholarship was named for her. This scholarship is awarded annually to a commercial pilot applicant striving to further her career.