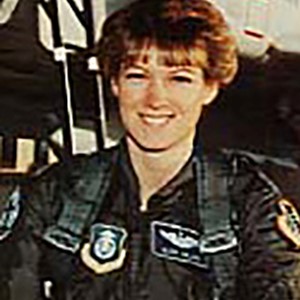 Lt. Col. Eileen Collins (later Col. Eileen Collins) was selected by NASA as an astronaut in 1990. In February 1995, she was the first female to pilot a shuttle mission. Eileen graduated in 1979 from Air Force Undergraduate Pilot Training and was a T-38 instructor pilot until 1982. The following two years she was a C-141 aircraft commander and instructor pilot at Travis AFB, California. She spent the following year as a student with the Air Force Institute of Technology. Eileen was then assigned to the Air Force Academy in Colorado, where she taught mathematics and was a T- 141 instructor pilot. She was selected for the astronaut program while attending the Air Force Test Pilot School at Edwards AFB, California, from which she graduated in 1990. At the time of her induction, Eileen had logged more than 4,000 hours in 30 different types of aircraft. She was the first female pilot and commander of a Space Shuttle, who retired on May 1, 2006, to pursue private interests, including service as a board member of USAA.