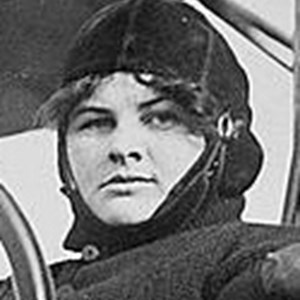 For Blanche Stuart Scott, aviation was natural. She'd set records in automobiles, so when Jerome Fanciulli, of the Curtiss exhibition team asked her if she would like to learn to fly she said yes. Glenn Curtiss was not exited by the idea of a woman pilot, but he agreed to give her lessons. He was so sure she should not fly that he inserted a block of wood behind the throttle pedal as a limiter. Despite his efforts, Blanche managed to fly to an altitude of 40 feet in the air. She continued her lessons and made her debut as a member of the Curtiss exhibition team at a Chicago air meet in 1910. Thus began the career of the woman billed as "The Tomboy of the Air.” Blanche flew for several exhibition teams, performing inverted flight and "Death Dives” from 4,000 feet. During her exhibition career she earned up to $500 a week appearing in meets with luminaries such as Lincoln Beachy and Harriet Quimby. In 1911, Blanche found herself inadvertently setting a record. She took off from Minneola, New York, one afternoon and impulsively flew 60 miles before landing back at the field. It was the first woman's long distance flight. Not long after, Blanche became the first female test pilot. In 1912 she flew Martin prototypes before the final blueprints for the aircraft had been made. Bothered by the public's interest in crashes and the lack of opportunities for women as engineers or mechanics, she retired from flying in 1916 and went into radio and film writing (cutting edge at the time). In the 1950s she came back to aviation as a special consultant to the Air Force Museum at Wright Patterson AFB in Dayton, Ohio. She died in 1970.