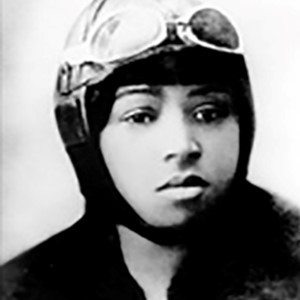 Bessie Coleman was born in Atlanta, Texas, in 1892. Although she was an avid reader, she worked as a laundress and briefly attended Langston University in Oklahoma. After moving to Chicago, she was inspired by the World War I pilots. She became interested in flying and became convinced she should be up there, not just reading about it. She started looking for a flying school but what she didn't realize was that she had two strikes against her: She was a woman and she was African-American. She heard through her friend, sponsor and mentor, Robert S. Abbott (founder and editor of the Chicago Defender newspaper) that Europe had a more liberal attitude toward women and people of color. So she learned to speak French and earned enough money to go to Paris to get her license. She would not let go of her dream and earned her license on June 15, 1921, from the Federation Aeronautique Internationale. She became the first African-American to earn an international pilot's license. Upon her return to the United States, she worked to increase the number of African-American pilots. One of her first flying exhibitions was at Chicago's Checkerboard Field, before a crowd which included some of her friends. Dapper Bessie wore a military-type uniform, complete with puttees and a Sam Brown belt, so that she looked like many other daredevil pilots of the era. For the next four years, she flew at shows whenever she could, and in between taught aviation for African-Americans. On October 12, 1922, she flew at the Tri-state Fair in Memphis, Tennessee. The Jacksonville, Florida Negro Welfare League was sponsoring an air show on May Day 1926 and asked Bessie to perform. Unfortunately, she was killed before the show while testing her plane. No one was sure exactly what happened, as accident investigations were not so thorough in those days. It is known, however, that she fell more than a mile to her death. Although her dream of establishing a flying school for African-American students never m