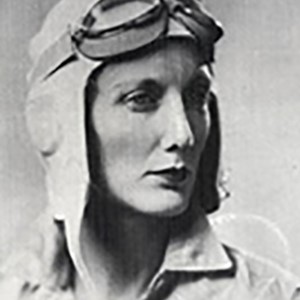 Beryl Markham was a British-born author, aviator, adventurer, and racehorse trainer. She was the first woman to fly solo across the Atlantic from east to west, and is now primarily remembered as the author of the memoir West With the Night . Largely inspired by the British pilot Tom Campbell Black, she worked for some time as a bush pilot, spotting game animals from the air and signaling their locations to safaris on the ground. Beryl was often the only link between saving the lives of those badly injured out at the mines. She flew in conditions and environments that were unknown at the time, without regard for her safety, so she could take the dying for medical treatment. When Beryl decided to take on the Atlantic crossing, no pilot had yet flown nonstop from Europe to New York, and no woman had made the westward flight solo, though several pilots had died trying. She hoped to claim both records. On September 4, 1936, she took off from Abingdon, England. After a 20-hour flight her Vega Gull The Messenger suffered fuel starvation due to icing of the fuel tank vents and she crash-landed at Baleine Cove on Cape Breton Island, Nova Scotia, Canada. In spite of falling short of her goal, Beryl had become the first woman to cross the Atlantic east to west solo, and the first person to make it from England to North America non-stop from east to west. Beryl chronicled her many adventures in her memoir, West With the Night , published in 1942. Despite strong reviews in the press, the book sold modestly and then quickly went out of print. After living in the United States for many years, Beryl moved back to Kenya in 1952 and for a time she became the most successful horse trainer in the country. North Point Press reissued her book in 1983. The re-release launched a remarkable final chapter in the life of the 80-year-old. When found in Kenya by AP East Africa correspondent Barry Shlachter, Beryl was living in poverty, and had been badly beaten in a burglary at her house near