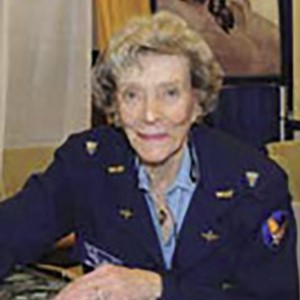 Bee Falk, WASP Class 44-7, was assigned to a U-78 training base where she flew as a utility pilot and an engineering test pilot. After the WASP were disbanded, Bee worked ferrying, flight instructing, flying a comedy air show act, and she was one of the first women aviation executives in New Jersey, owning her own Cessna dealership. Bee never lost her love for aviation, and after her marriage to fellow pilot and airplane enthusiast Joe Haydu, owned many airplanes, including a Stearman and a Link trainer, and flew air races for fun. Bee is best known for her service to the WASP organization (Order of Fifinella) as its president from 1975 to 1978. During that time, she worked with Col. Bruce Arnold (Gen. Hap Arnold's son) and Senator Barry Goldwater to bring about militarization of the WASP and to gain them veterans' benefits. The WASP had the support of all the women serving in both the House and Senate at the time. Bee and several other WASP testified at the various hearings, and their efforts were rewarded when President Jimmy Carter signed The G.I. Bill Improvement Act of 1977, granting the WASP full military status for their service. In 2003 Bee published her memoir- Letters Home 1944-45 . Bee remains a much sought-after spokeswoman for the WASP, proudly wearing her WASP uniform on many occasions. Bee has her dress uniform on display in the Smithsonian, and joined President Obama and other women military aviators in the Oval Office in July 2009 as he signed S.614, a bill to award a Congressional Gold Medal to the WASP. Bee was inducted into the Aviation Hall of Fame & Museum of New Jersey in May 2000.